Some things Man was never meant to know. For everything else, there's Google.

Since downloads have been coded into FFS I made a Vintage Downloads section and started uploading some files. Starting with the MS TCP Client for DOS 2 disk set that took me forever to find working links for, this section will grow with network and file utilities I have found useful.

As the title says, FFS now has secure download areas (filebases) as an option. When on, the script sends the file to the browser and does not give up info of where the file is. The file directory can and *should* be outside of the webroot. Also, image previews of said files are also served by the script using either stream_get_contents or using the gd image functions to send the data to the browser.

The filebases have a self-contained DB per area for easy administration and relocation. There is also a simplistic rating system and comments per file for users who are logged in. File can mean files... aka a file set. Instead of packing a bunch of files together into one big file, the script handles any number of files as 1 entry. That way users can pick and choose which files they want out of the set. For unstable/slow network links (think I2P/Tor) it should make a big difference.

Images that are uploaded as part of a fileset are automatically thumbnailed and displayed on the filebase pages and optionally securely served as well.

Tags have been added to the filebases but will not show up everywhere. While in a filebase, only tags in that area will be shown. I have not decided if I want to code a way to show tags from all enabled filebases. Maybe a cache system that dumps tags and links into a text file to save CPU cycles reading from the DB files...

So I actually found a AGP video card, an old ATI Rage IIc that did support hardware overlays for Xserver. Problem was it had so little ram, I couldn't even get 320x240 output from the tv card. I tried a 640x480 Xserver resolution and 320x240 in tvime and mplayer but still no go. I had to go back to XP.

This time I remembered at least where all the drivers were so it only took about an hour to get back to being able to view the commodore 64 on the monitor. I tried to use partition magic to image the drive but with only 512mb of ram that proved challenging to say the least. I ended up using the builtin XP backup system and set a weekly incremental backup to my nas (had to drop down to SMB1 thou).

Back to the 1541 adapter I decided it would be best to drop down to pure DOS and not fuck with windows at all this time. I installed freedos on a 2nd 40gb hard drive and setup grub2win to be able to boot into it from the windows boot menu. Purrrrfect! I even went ahead and got TCP/IP networking up so I can download programs directly into dos and browse the web somewhat. Sooner or later I will get the sound working too.

Using the star commander dos program I am able to read and write disk images from dos with the original 1541 5 1/4in floppy drive. Mission accomplished! I even grabbed a copy of Cyber Mage and played it for a bit albeit without sound for now.

On another note, I had a heck of a time finding working links to ancient dos programs and will host them here or on the ftp server soon. Specifically the MS Client files I needed to get the ethernet working took me to 10-15 different sites before I found good links.

Awhile ago a client brought in a Compaq Presario 6000 Midtower PC to get his information off the old failing IDE hard drives. After transferring his data to DVD's he told me to wipe the hard drives and I did. He also told me to keep or trash the PC. I figured why would I want this POS but I kept it around just in case. Fast forward to earlier today, I'm sorta glad I did... sorta. 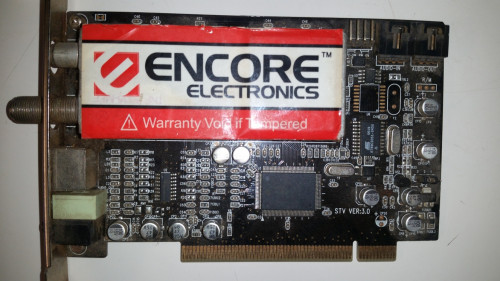 My whole purpose was to be able to view the Commodore 64 video on my computer monitor instead of using a old TV. Also I figured I could record the input for whimsical and proof purposes. Testing old NES/SNES/Genesis etc systems would work as well all without a TV or a bunch of adapters. My main PC has a Blackmagic Intensity Pro for HD input but it does not support the above setup.

This thing errr PC has a AMD Athlon XP 2000+ cpu at 1.6Ghz, 512mb DDR ram, a 60gb IDE hard drive, and 2 DVD-ROM drives. I put my old Encore ENLTV-FM PCI card in and proceeded to install Windows XP. I had to find all the chipset, audio, network drivers not to mention a working driver link for the TV input card. After about 2 hours of installing, rebooting, and configuring I fired up the Tv card's software with a Commodore 64 attached to the Composite input. 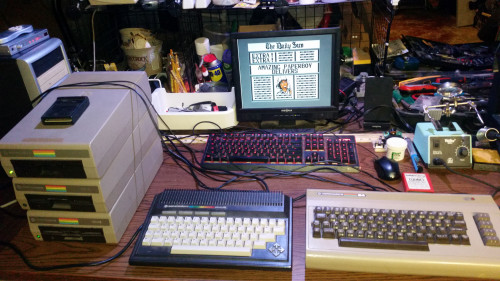 Eureka I said! It works beatifully I said!

Then I did something stupid. I forgot to do a backup image of the system in its perfectly running state before I starting fucking with it. I have a 1512 adapter that hooks up to the PC's parallel port and to the commodore serial cable. While installing software to be able to use the commodore disk drive it wiped some very important DLL's from the system! XP would no longer boot! I tried going into safe mode... no go. I tried expanding dll's and putting them into Windows/System32 and re-registering them... nope. I tried the sfc /scannow utility... nope! I said ok screw this, I'm going to linux.

I used the tv input card in some flavor of linux before and I remembered tvtime for watching and mencoder for recording. I said, ok, this should work out better as I can install fluxbox, tvtime, mplayer, and a few other utilities and have better performance than windows XP.

I was right of course, the system flew thru the debian stretch install and the kernel immediately detected the tv input card. One slight problem! The graphics card in this thing... errr PC is a old S3 Pro Savage DDR. It's bad enough its stealing up to 32mb of precious memory but the X server's s3-savage driver doesn't support hardware overlay! Tvtime is out! I then tried mplayer with the x11 video output driver and the video output is sluggish as hell with some serious artifacts. Barely good enough for testing a system has video output, barely enough for typing, and certainly not for gaming!

Now I am considering *downgrading* to a older version of the distro when the hardware overlay was working with the s3 savage card/driver. Or *downgrading* to Windows XP and this time save a backup image once I get all the drivers setup again. Or *finding* a PCI or AGP video card in my stash that linux supports hardware overlay (ya right...) All of this to save some bucks for an adapter to go from Composite to VGA and another one to go from RF to composite/VGA. 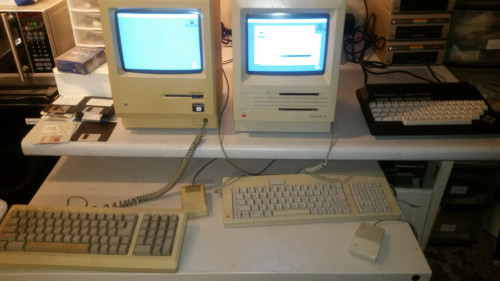 We use an Asante Talk, a old 10mbit hub, and a windows mac emulator to get the vintage macs on our network for filesharing. They are so far unmodified and we would like to keep them that way but external SCSI hard drives that are compatible and working are hard to find. I would love to run a BBS on them for multi-node operation but thats so far down on my life todo list... maybe once I get my farm and solar array online 1st ;)